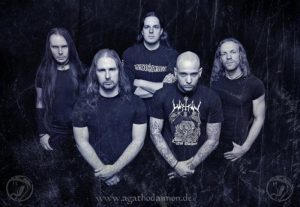 For the fourth time Agathodaimon have entered Kohlekeller to record an album. We have already preproduced a few songs together and I can say that these songs are both super strong and fuckin evil. It’s a step back to their roots but still catchy and modern. Hard to say. Let’s have a listen when it’s released on MASSACRE RECORDS later this year!